Trees make way for bustling communities; people come and go, making their marks on the world; and countless companies open and close their doors. One hundred years ago this year Ramsay Signs Inc. in Portland, OR opened for business and remains one of the leading sign companies in the Northwest today. The following is a brief history of the company compiled from company board meeting minutes, the Oregon Historical Society Archives and various stories passed down from generations of owners and employees who are proud to have made their contribution to the sign industry and the success of Ramsay Signs for 100 years.

In 1911, a 28-year-old newspaper editor from Louisville, Kentucky was looking for a change. Arch Gibson Ramsay – known professionally as A.G. Ramsay – headed west to Portland, Oregon, married his sweetheart Zelma, and established Ramsay Signs as a handcrafting sign company in a small building in downtown Portland, Oregon.
Though little is known of the earliest years of Ramsay Signs, business flourished throughout the 1910s and 1920s – the company had signs everywhere from Seattle, Washington to Redding, California. In the 1920s, the company expanded and opened Brilliant Neon Company, a subsidiary that focused on electrical signs rather than the gold leaf lettering Ramsay Signs installed for banks and other businesses downtown. Employees at the Brilliant Neon Company’s shop, located in Portland’s Hollywood District, were active in the community and used their expansive social networks made through various club memberships to sell signs in the neighborhood.

When the company was incorporated in April 1929, the economy was in an upswing. That upswing was to be short-lived, as the stock market crash in October and the subsequent Depression hit individuals and industries alike. In November 1931, the company notes indicated, that while the business itself remained strong in light of circumstances, collecting customer payments was growing increasingly difficult. The company “was still in healthy condition” as of 1932, board members Ramsay and John W. Davis noted.

In 1933, the Brilliant Neon Company was renamed Ramsay Signs, and the Brilliant Tube Company located in Portland, OR was acquired. This acquisition had been a long-time desire of A.G. Ramsay , when the Depression caused the Brilliant Tube Companies purchase price to plummet from $5000 in 1929 to a mere $750 in 1933, it was a deal A.G. Ramsay could not pass up. Ramsay Signs continued to defy the conditions of the Depression through the mid-1930s, noting in 1934 that they believed the “attitude of the buying public was turning around.”

However, as history states, the attitude of the buying public did not turn around, and in 1936 Ramsay Signs noted “lower than anticipated sales.” The company struggled to sell signs and encouraged its salesmen to promote leases to help maintain revenue during the up-and-down economic fluctuations of the late 1930s and early 1940s. A practice the company still maintains today.

When the war was in full-swing in 1942, Ramsay Signs faced its toughest times yet – far worse than at any time during the Depression. As men were shipped off to war they were faced with a labor shortage and the price of parts reached astronomical levels. Blackouts and dim-outs were becoming increasingly common in Portland and across the country; manufacturing – let alone selling – signs became a daunting task.

When the company realized it couldn’t survive on sign sales alone, the shop was converted into a plant for building and preparing war materials. While it is unclear exactly what those war materials were, from conversations with retired employees of the company it’s believed those materials may have been cold cathode lighting and gas tanks for the military. This manufacturing was short-lived, as there was not much profit in supplying parts for the military. Through it all, the company survived, though it took several years before the company once again reached its levels of success prior to WWII.

The company continued to rebuild through the late 1940s and early 1950s when tragedy struck. On February 1st, 1956, A.G. Ramsay died at age 73 after a short illness. John W. Davis, long-time board member and a Ramsay Signs employee since the early 1920s, was immediately appointed President and took over operations of the company. Though the 1940s and ’50s were a difficult time for the company, it was during this period that two of its most famous signs were erected. Olympia Beer, located in Portland, OR erected around 1947, and the famous White Satin Sugar sign, installed in 1940, became regional landmarks. Most notably, the White Satin Sugar sign has taken on various faces over the years, including White Stag, Made in Oregon, and most recently, the sign was changed to simply read Portland, Oregon after the previous tenants of the building had long vacated. The sign was designated a historical landmark in 1978 and donated to the City of Portland in 2010. The previous “Made in Oregon” and current “Portland Oregon” sign is often shown in regional and national commercials and has been featured in movies as well ISA’s as best of regions design in 2011.

The 1960s ushered in a new era of struggles for the company, though these were caused neither by the economy or war – instead, it was garden parties and the Highway Beautification Act of 1965 that threatened the company’s existence. The act called for control of outdoor advertising including the removal of certain types of signage. Locally this caused an increasing backlash against ostentatious signs – most notably neon signs – caused an increase in restrictive permit and zoning laws for Portland signage. Garden parties – small groups concerned with the beautification of neighborhoods – believed neon signs to be eyesores, and thus campaigned for stricter laws concerning the size and placement of signs. In 1962, the company was concerned enough to state that “the future of [the] sign business seemed rather discouraging,” and considered venturing into other industries, including electrical work. The infamous Columbus Day wind storm that year also culminated in “disastrous losses” for the company, some of which took several years to recuperate. It was also during this time that the company was finding that its small shop on Sandy Boulevard, purchased in the 1920s, was becoming too small for its current levels of production. As the original shop on Stark Street was condensing and moving to a small building a few blocks north to 128 Southwest Third, the Hollywood District shop was seeking a larger location. After a 10-year search, Ramsay Signs moved into a 10,000 square foot shop in Portland off I84. Though the expansion was successful, the company’s struggles continued – a two-month strike of sheet metal workers halted production in 1968, and rapidly-increasing labor and material costs made the board once again consider venturing into other industries. The death of owner John W. Davis in September 1971 only raised more questions.

End of an Era and New Beginnings

When Conrad Davis, stepson of John Davis, took over Ramsay Signs in October 1971, it marked the first major change in company leadership since the company’s incorporation more than 40 years earlier. Faced with crippling inflation of both materials and labor, Davis was forced to cut major costs. Ramsay Signs was bolstered by its recent acquisition of Artcraft Neon of Longview, Washington, which acted as a successful subsidiary after initially struggling immediately after its purchase. The 1970s were a rebuilding period for the company, which after 30 years of relentless obstacles, including war, changing laws, death, and rising costs, was finally getting back on track. Armed with a new sales force and management, sales skyrocketed and the company began to stabilize is terms of sales volume and profitability.

In August 1985, long time Office Manager Coral Schlappi and Operations Manager, Ben Andreas purchased Ramsay Signs. While under their leadership the company continued on a successful course, increasing sales and eventually moving to a larger manufacturing facility in Portland, OR. In 1997, Coral and Ben retired and sold Ramsay Signs to Darryl Paulsen the General Manager of Ramsay Signs and John Olds, the company CPA. During this time the company expanded into other markets by opening a wholesales letter division, Wholesale Letters, Inc in 1999 and acquiring a number of competitors starting with Heath Northwest in 2002, Martin Bros Signs of Eugene and Blaze Signs of Portland in 2005 and Multilight Sign Company in 2007.

In 2010 Joe and Wendy Gibson purchased Ramsay Signs and continue to operate the company on its 100 year anniversary.

While Ramsay Signs is celebrating its 100th year in business, by no means are they slowing down. Still battling the same regulatory obstacles and economic challenges faced by prior generations, Ramsay Signs continues to evolve with the sign industry and thrive. Well-known for their innovative techniques, creative problem solving and superior customer service Ramsay Signs will always be looking for a new challenge and better ways to service customers and manufacture a superior product. Ramsay Signs remains one of the leading sign companies in the Northwest and is dedicated to promoting the industry. Owner Joe Gibson is the Regional Director for ISA for the Northwest Sign Council serves as Secretary for the Oregon Apprenticeship Board and is a licensed instructor in the State of Oregon for metal sign fabrication. Ramsay Signs is located in Portland, OR, servicing customers across the United States. 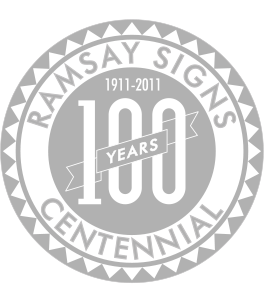